The Development of Shakespeare's Stratford

Click to view timeline outlining the development of Shakespeare's Stratford

Conjectures for Shakespeare in Titchfield

Shakespeare wrote only two dedications and both were attached to long narrative poems Venus and Adonis (1592-1593) and The Rape of Lucrece (1593-1594). Both dedications were addressed to Henry Wriothesley, The Earl of Southampton and Baron of Titchfield. Wade and Watts (1989, p. 33) believe that Shakespeare’s sonnets were written in the early 1590s in South Hampshire while he was deterred from staying in London by the 1593 plague. Shakespeare could have stayed in Titchfield and developed an intimacy and love for Wriothesley as rendered in the dedications, particularly the second and in the sonnets themselves as argued by Southamptonians (Rowse 1965, pp. 88-89). This suggests that Shakespeare was in Titchfield from 1592 to 1594 under the patronage of the Earl.

Wagner (1958, p. 362) wrote: “the commonest explanation of heraldic design lies in the medieval fondness for a canting coat, punning on the owner’s name.” The image of “a falcon shaking a spear gripped in its talon” (Tannenbaum 1908, p. 18) in the Shakespeare's family coat of arms could have been a pun on the family name but it could also have been inspired by the Wriothesley's family coat of arms to declare the intimate relationship between Shakespeare and Wriothesley at Titchfield.

A letter from Henry Wriothesley, written in 1592, was signed by him but written by another hand. This hand is identical to a portion of the manuscript of The Play of Sir Thomas More, identified as “Hand D”, the hand of Shakespeare as suggested by Richard Simpson in 1871 (Thompson 1916, p. 39). If the identification is correct, not only will it provide evidence for Shakespeare’s role as Wriothesley’s tutor (Akrigg 1968, p. 193), the documents then signify the only surviving examples of Shakespeare’s handwriting. 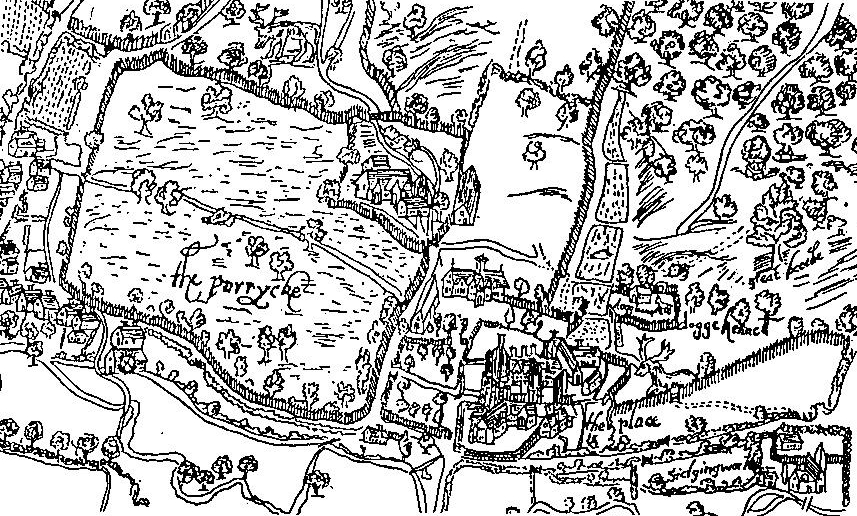 Map of Titchfield (1610) (click on image to enlarge)
Gray (1924, pp. 581-611) claims that Shakespeare’s company presented Love’s Labour’s Lost at Titchfield on the afternoon of 2nd September 1591 during the royal progress. Although Akrigg (1968, p. 193) refutes this by asserting that there is no mention of a play or actors in the full account of the royal entertainment at Titchfield, references made to "The Parke" and "The Place" in Love's Labour's Lost can be clearly found in the 1610 map of Titchfield which suggest that Shakespeare was in Titchfield when writing the play.